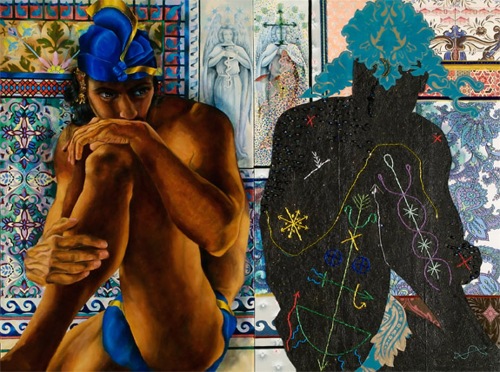 Oil paintings on linen and wood that seem to stand proudly within the tradition of classical easel-portraiture, the pieces are started and finished on Castro’s studio floor. There, on the floor, they are collaged, sewn into and made material. This fact is just one of the mulltiple nodes of contradictions and elisions that supply the work with the tension that festoons it.  Mirror-imaged and sexed works they point to the entirely sensual contents and concerns of belief, faith and healing. St. Sebastian’s Sacred Heart, for example, Castro’s most apparent riff on Western Art History, cuts right at the meat of ecclesiastical narratives and myth-making: salvation as the flower and the life. Note, at any rate, St. Sebastian’s full lips. Note that the great St. Sebastian paintings of the Western Canon  all depict a young man no more than 20 years old, his muscles tense and the divine fire within him lit and ready to explode.  The fires of faith leap out and burn into the desire for holy unity, for god, with god, with another.

And that’s the thing: Castro’s work, though evidently classically figurative,  is well understood not within the classical tradition of portraiture; rather it falls within the iconoclastic (if you’re more orthodox, just go ahead and say heretical) tradition that’s pegged the physical, the human and the sexual against the soft touch of that most sensual longing, faith. Think Bernini’s “Ecstasy of St. Theresa:” more than Durer’s Christ.  Except, of course, Durer’s self-portrait as Christ.  Think Pasolini’s Christ in his film “The Gospel According to Saint Matthew”. Think the whirling Dervishes: Rumi’s poetry: the insistent poetics that what must be the  knowledge of god must also be more  than a little death. No, it must course the channels we feel cut inside when we’ve seen a pink sunset holding our true love’s hand.

Castro, born in Puerto Rico, and raised in the United States, a Catholic and a steady practitioner of Santeria, wants you to see the fleshed out materiality of faith, whether Catholic or apocryphal and political. The diptychs function as well-defined rorschachs for you to divine the Other, the man, woman-being who, by being what you are not, constructs that which you are.  Jewelry sewn into linen mimic on canvas the hand-made jewelry that Castro makes over the course of a month or more–he described them to me as ‘sashes’ worn for military or ritual regalia.   Functionally separable but conceptually of a piece with the paintings, the sashes fit around the body and help make the project of constructing an identity– Castro’s own I wager–a viable objective.

So about those paintings: well, they’re collages really, composed by disparate acts of making. But they’re unmistakably paintings. They’re not appropriations and they certainly don’t work within that particular post-modern strategy. They’re constructions in the way we are all constructions, multi-logical multi-caused. And, just like us, they are fixed to the moral view of the body as the site of sexed-spiritual activity.

It’s not hard to see that view when you look upon Castro’s works on display, say his “Inle-Divine Healer” or his “Reflecting My Roots”. But all that, above and beyond, comes into sharp focus when gazing upon his “St. Sebastian’s Sacred Heart”. His own riff owns all the sexuality of the classical images but with the crucial difference that it is only the Rorsach, the black other that’s laid with arrows. The sacred heart is collaged over the Rorschach figure, itself laid over the colonial imagery of the Conquistador Matador.  Sexed Saint Sebastian, on the other hand, is stretching languorously as if before or after the act.  Sebastian is ready to take on his god, or has just taken him on.  The patron saint of archers, Castro’s St. Sebastian has been been built up over the histories of invasion, on the eliding move that all politics is at the end just so much decoration on which we all hang our beliefs.

Gerardo Castro’s work is on view at the Theo Ganz Studio in Beacon, NY  until August 4th 2013.

Castro’s work is available for viewing  at his website, here.