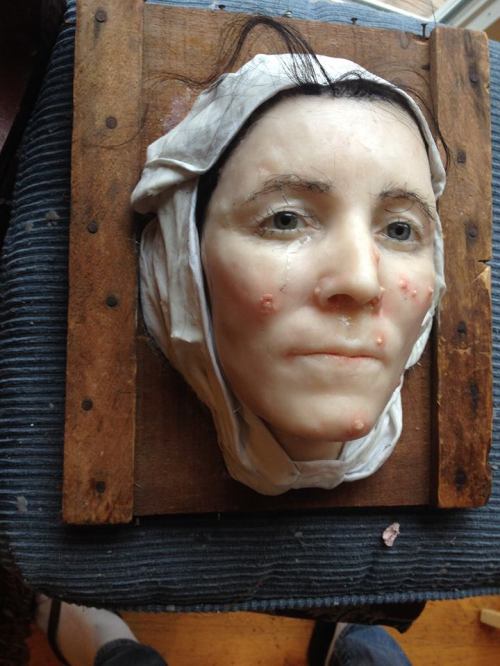 Sigrid Sarda is an artist, living and working in New Paltz, whose work you should get to know.  That’s all. Well, it could be all were it not that I want to say more.

Sarda work is in turns gorgeous and morbid, gaze inviting and gaze smacking. The work strikes precisely those fancies that force you to caress the now-polished feet and the taut backs of all those classical and renaissance sculptures you’re not supposed to touch at the Metropolitan Museum of Art.

Sigrid Sarda’s work traces her biography. Or not. She trained as a painter and only recently moved to wax work. Her work is far richer that this simplistic, pat account, of course, and it rightly insists on a richer meditation than the mundane read only a biographical testimonial can provide.  But you can’t rule out biography when you see the work.

Her pieces are life-size wax works built on hand wrought armatures, sometimes real human bones upon which she hand-models cast faces and other body parts. The pieces reflect Sarda’s classical training in painting, though, interestingly, she started off with late Guston-like riffs and only gradually moved to rather more classical representation. So now the motifs of her current work are that of history painting. But the execution of the pieces, their making, is pure mania. This is all to the work’s strength.

If you wanted a master class in figuration, you couldn’t do much better than tracing out Sarda’s work and asking her to show you what’s what, though whether you’d want to be around the mania that surely feeds her work is an altogether different question.

Sigrid has shown her work in most of the great cities where you see great art. She’s held highly vaunted residencies. She showed a sculpture installation at an open studio exhibition in Hudson last summer and her work was one of the strongest pieces there. I suspect this is a common feature of her exhibition history.

Sarda showed a piece of work at the O+ Festival this past fall in Kingston. I saw the piece within a slice of time when no one was around. I now wish I’d seen the piece with people around me. I’d have enjoyed noting the expressions on the audiences’ faces. Perhaps you were a member of that audience.

Sarda’s work is at once beautiful, disturbing and narrative.  You needn’t know anything more about the work than seeing the work itself. And you’ll know the work better as you look at it longer. Sarda’s work invites a penetrating gaze.

Sarda works mostly by herself. She works hard and for long hours. She is very particular about her own practice and holds herself to the highest standards. You’ll note this when you see her works. She uses real hair in her wax works. This is the kind of touch that might make Galatea or St. Theresa come alive.

Her works speak more to the memento mori that supplied the moral articulation of history paintings. There’s the allegorical and the symbolic; you can check that off, too.  But that’s not all there is. And, so, yes, the better for her, and you and me.

Memento mori is always stronger when it is beautiful and beautifully made. The repulsive is only strong when it alternates between the pull of the beautiful. Sarda has evidently thought deeply about precisely that.

Sarda’s pieces are meant to be seen as solo works, sometimes as group works.  She’s trying to figure out how to do a masterpiece group work that’ll be installed inside a labyrinth. I can’t wait to see that work.

(Photos of work in progress, courtesy of the artist)